The big day has finally arrived! After over 2 weeks of challenges, interviews, media appearances in Sydney and in each of their respective states – the 7 winners of the Best Jobs in the world were being announced TODAY! I woke up this morning in complete awe that today was the day. Everything that all the finalists had been working towards the last couple months was on the line today. I couldn’t even begin to imagine how they were all feeling.

The last couple days in Sydney have been used to recover from the various challenges, interviews and events they all underwent in their respective states, as well as go through many more challenges, interviews and events in Sydney. It was also time to get the group together to see how they work as a team. It was really nice to finally be able to meet some of these people who I have truly idolized, and in a non creepy way stalked the last couple months. Nick Tilley describes it the best as, “a big reunion of people you have never actually met before.” It is absolutely true. These finalists have been watching each other’s Facebook, twitter, instagram and blogs seeing what they were all up to since the start of the contest. It was definitely surreal to have them all together vying for these “Best Jobs.”

Going back to the announcement which happened today – all spectators and media crew entered the Art Gallery of New South Wales in Sydney earlier than when the finalists arrived. We had the opportunity to view the boards, which displayed pictures and quotes from all the finalists’ time in Sydney and respective states. We loaded into the auditorium and waited amongst the many film crews, photographers and news reporters for the arrival of the finalists. When the finalists arrived I got instant chills. This was it!

First to be announced was Chief Funster (NSW). The winner was Andrew Smith from the USA! Congrats ANDREW!

Second to be announced was Lifestyle Photographer (VIC). The winner was Roberto Seba from Brazil! Congrats ROBERTO

Third to be announced was Outback Adventurer (NT). The winner was Allan Dixon from Ireland! Congrats ALLAN!

Fourth to be announced was Park Ranger (QLD).  The winner was Elisa Detrez from France! Congrats ELISA!

Fifth to be announced was Taste Master (WA). The winner was Rich Keam from England! Congrats RICH!

Sixth to be announced was Wildlife Caretaker (SA). The winner was Greg Snell from CANADA!!!!!! Congrats GREG!

LAST but definitely not least, was the newly added position of High Flyer (AUS) offered by Virgin Australia. The winner was Cameron Ernst from USA! Congrats Cameron the comeback kid!

The 7 winners are official! 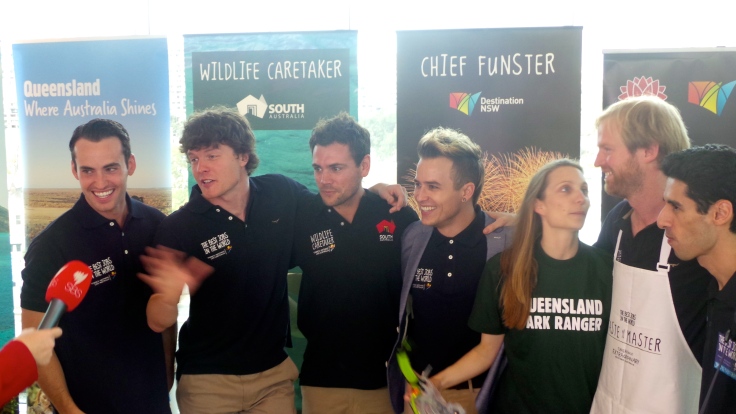 It has been such a buildup of nerves and excitement from everyone that I think everyone is happy the announcement is complete. I know everyone is looking forward to the Wrap Party tonight to let loose a bit and enjoy our time together.

It’s been an absolute blast the last couple days and it is really starting to sink in that my time in Australia and time with “Best Jobs” is coming to an end… for now. All I have to do is enjoy the rest of my time here and live it up!

Once again, congrats to all the winner and FINALISTS for all the hard work! You should all be so proud of yourselves!