I think I am finally getting over the jetlag. I always think that I am superwomen and will beat the jetlag… but it never happens. I have been hitting the wall at around 9:30pm and waking up at 6am more energized than the energizer bunny. Truth be told, it has not been fun and I’m really looking forward to my sleep schedule getting back on track in the next couple days!

This morning I would be heading over to Bondi Beach for a Surf lesson courtesy of Let’s Go Surfing. Bondi Beach holds a special place in my heart because it is where I would stay in Sydney whenever I visited last year. A good friend of mine was studying at the University of New South Wales in Sydney and had an apartment looking directly out onto the beach. When I arrived to Bondi, the first thing I did was walk by her apartment. Her apartment was located on the left side if you are looking at the beach from the ocean. It was a small 5-person apartment with white walls and not much room to move. Though it was small, it was very homey and definitely fit the beach lifestyle. It was really nice being able to go back to see where I spent a lot of my time when I was in Sydney last.

Let’s Go Surfing was located on the opposite side of the beach in an area where the waves weren’t as big. It was an excellent beginners location to learn how to surf. Even though I had surfed a couple times when I was last in Australia (Surfer’s Paradise, Rainbow Beach), a beginner lesson was definitely necessary to get things started this time around.

My surf class consisted of myself, a young married couple and another gentlemen. We were introduced to our instructor who had been teaching surfing on Bondi for just over 3 years. Fun fact about our instructor was that he was born in Tahiti! I found that so cool – you rarely ever meet anyone from Tahiti! Why anyone would leave the beauty of Tahiti and the islands is beyond me.

The lesson began with basic ocean safety and surf terminology. We then completed a short warm up and then grabbed our boards. Mastering your surf technique on land before heading out into the water is ideal because when you are battling the force of the ocean, the fundamentals sometimes can get thrown out the window. For those of you who have never surfed before, basic surf fundamentals consist of determining which stance you will take on the board (regular or goofy), foot positioning, weight distribution and finally perfecting the surfer’s look 😉

A few beach practice runs later and we were ready to battle the waves. Feeling out the ocean was key to being a good surfer. There are elements of the ocean such as the riptide, sand banks and the curls that play various roles in assisting a surfer. After a few practice runs and tuning in my inner Soul Surfer, I was starting to get the hang of it again. My previous experience with dance, which involved copious amounts of balance and coordination, definitely paid off and assisted in my surfing ability. The weather conditions today were perfect, as it wasn’t too cold or windy outside and there was still sun shining down on us. Usually by the end of surf lessons I am ready to head inside and warm up, but this time I was having so much fun and was improving with each ride, I didn’t even think of stopping! I guess that just means ill have to come back and do it again soon 🙂

Following the lesson, the young couple and I grabbed lunch at a place called The Bucket List. The Bucket List is located on the Bondi Promenade and delivers a nautical style dining experience. The outside has various tables with colourful couches and chairs, as well as milk crates used as stools. It was a very comfortable and “chill” environment that offered a picturesque view of the ocean. The food was delicious as well, however it was quite pricey. I guess that’s what you have to expect when you are choosing to dine directly on Bondi Beach. For a small (starter sized prawn salad) it was 25$, and it didn’t come with a drink. Let’s just say that was my treat meal for the week!

After lunch, Anna, David (young couple) and I began one of the most breath-taking coastal walks I’ve ever seen before. The Bondi to Bronte Coastal Walk is in my opinion, one of the most beautiful places in Sydney. There is no description necessary, you can take a look at the pictures below and you’ll see what I am talking about. The walk we chose to do took us just under an hour, allowing for time to take pictures and absorb the beauty.  Along the way, we took various stops to sit and watch the ocean waves crash against the rocks. 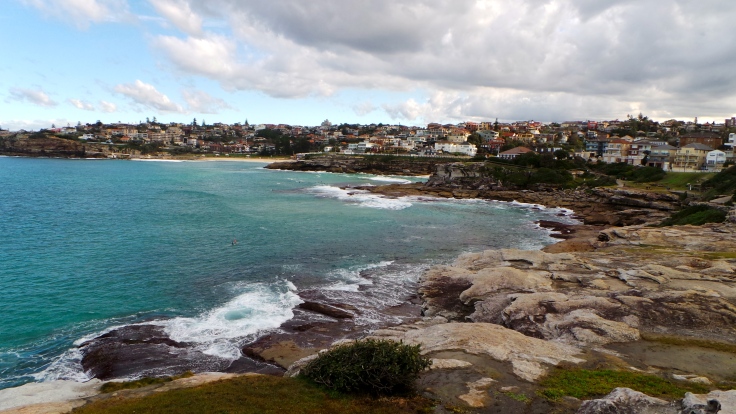 Throughout my travels, I have met so many people from all over the world. From Europeans, Asian, Africand, South Americans to North Americans, everyone has a unique background and story to tell. Anna and David were no different. They were from Ohio, and have been married for 3 years. They were what I dream to find in a marriage in my future, fun and ready to travel and explore together! I couldn’t help but laugh at Anna a few times about being married so young and being a “granny.” She told me how she joined the public library in Melbourne close to her, as well as she started taking up knitting. David was hilarious as well; he was convinced that he would be the next featured on Bondi Rescue for his surfing abilities. Overall it was a blast spending the afternoon with them and we may actually meet up in Melbourne at the end of the month.

After grabbing a taxi on Bronte Beach, I headed over to the Tourism Australia head office in Sydney for a small visit and get together. Greeted with smiling faces all around, everyone was so excited to meet me. It was so nice to meet all the wonderful people behind the names that I had been in contact with the last couple months. The “Best Jobs in the World” campaign is starting full force next week, so seeing a group so relaxed and ready for action was extremely inspiring. I can’t wait for the “Best Jobs in the World” contest to begin, and all the finalists to arrive in Australia!

Matt Corby at the Enmore Theatre

Ever since being in Australia last year, I had noticed a particular artist on the radio that was unlike anyone I had ever heard before. His name was Matt Corby and he was a discovered on Australian Idol a few years back. I instantly fell in love with his folk, indie style music and just had to go see him while he was playing in Sydney. 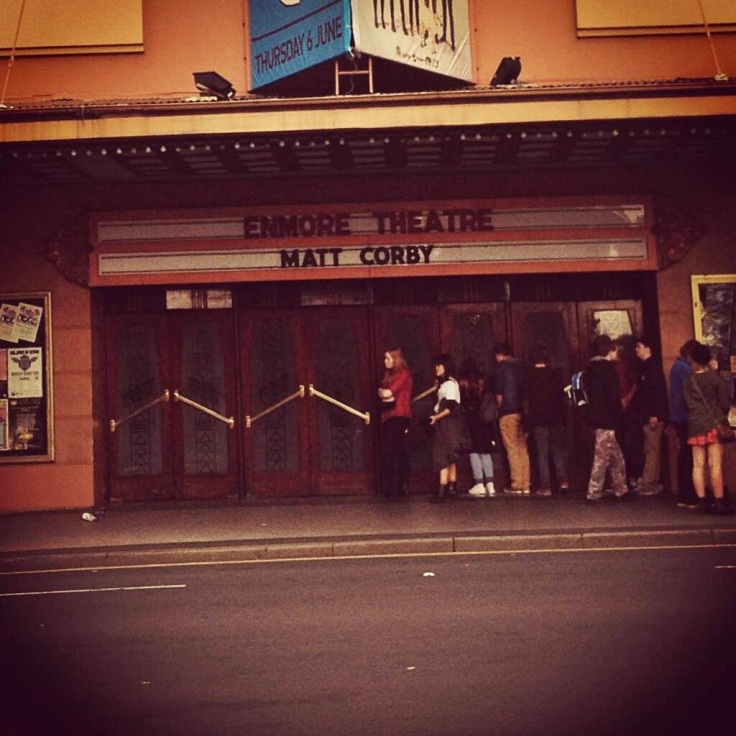 I can’t express enough how appreciative I am of the Enmore Theatre and Alison from Tourism Australia for getting me a ticket to the show, because it was absolutely incredible. The last time I had been at the Enmore Theatre was when I was with my friend Lisa (studied at Uni of NSW), her brother (Scratch Bastid) and the Trailor Park Boys for the International Tour. The Matt Corby concert was definitely a complete 360 from the TPB’s comedy show.

When Matt Corby sings, his voice has the ability to pierce through your skin and allows you to feel his music inside of you. He voice is so rich and strong for such a young singer (22 years) that he blows you away with just one note. He captures your attention with his incredible stage presence and his commitment to his music.

Resolution is his newest single that he has released, and it has been played on my iTunes on repeat ever since his concert on Friday night. If this kind of music is of interests to you, you should check out some of stuff on YouTube. Some of my favourite songs are titled: Brother, Untitled, and Made of Stone.

After the concert, I was beat. With a long day of surfing, exploring and concert going, it was time for bed.